Benamargosa in the Axarquia
The village of Benamargosa is the centre of this rural area and nestles on the bank of the river which winds like a snake towards the coast. Sometimes a raging stream in the winter, it is the lifeline of the village; its slopes are planted and ploughed and it is the only provider of water, filling all the wells. 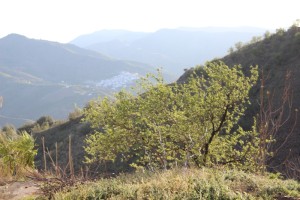 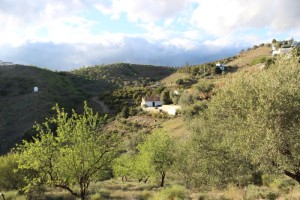 The village centre is about 90 m above sea level, the mountains to the right and left of the valley rise to a height of 550 m. The warm Mediterranean climate means that more than one crop a year can be grown. Vines were traditionally cultivated on the mountain slopes around the village, mainly the Malaga grape, which is used to produce the famous raisins. The traditional farming of grapes, carob, olives and almonds is gradually being replaced by the cultivation of mangos and avocados. Agriculture is the main source of income. Although this is becoming increasingly more mechanised, there are still farmers who leave early in the morning with their mule to go up to the steep fields to work with the hoe on the stony ground.

Most of the approximately 1700 inhabitants live in the village and only a few in farms and country houses scattered about the countryside. Benamargosa village is the centre; in the morning after sunrise the farmers and workers swarm in all directions to their fincas on foot, by motorbike, mule or pickup. In the evening everybody meets back in the village on the main street, in the many bars, in front of the kiosk or at the supermarket where the day’s events will be discussed and commented upon.

History
The stepped and staggered houses and narrow streets winding up the hill are typical of the traditional architecture of the Moorish era. The first historical evidence comes from the 15th century. The historic jewel of the village, the Church of the Encarnacion, was founded in the 16th century. In the 19th century Benamargosa was famous for its grapes and had 4000 inhabitants. After a disease destroyed almost all the vines, the population fell within a few years to 700 people.  During the Spanish Civil War (1936-39) Benamargosa was a small centre for tobacco smuggling and therefore sometimes called “The Little Gibraltar”.